skip to main | skip to sidebar

The Secret Past of Glory... 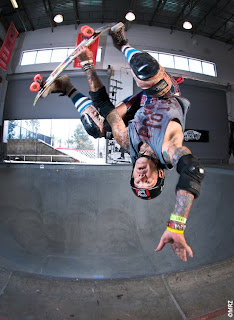 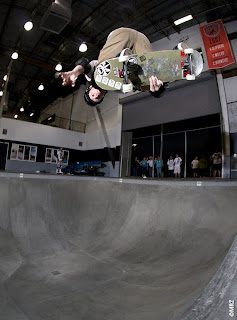 Long before my life was consumed with two wheeled British headaches, me and just about everyone I know, spent all of our free time on four wheels. Skateboarding in the early 80's was definitely not like it is today. We didn't have skateparks or sponsors and we skated because we were wanted something different. It was was punk rock and alienation at it's best. We built ramps and traveled. It was a counterculture that was underground and like a giant family. I'm not sure how it happened, but it seems like almost every old skater that I know is involved in motorcycles to some degree. The cool thing about having the Glory shop is that I get to run into old friends and people that I probably wouldn't have ever seen again.
This weekend, two old friends are tearing up the "Masters(OLD GUYS)" division at the Pro-Tec Pool Party . First there's Duane Peters (top photo) if you don't know who Duane is, then the whole idea of punk rock skateboarder is foreign to you. Duane has been destroying it all since the dark ages of skateboarding, and continues to make most skaters 1/4 of his age look like pussies. This isn't your X-Games clean cut TV skate world, this is soul skating, and why I always have and still do love skateboarding. Duane also has been riding bikes all of his life. We built a killer hot rod Commando for him a few years back. After I told him to break the new motor in slowly, he immediately got on the Freeway and rode 80mph from Hollywood to Long Beach. That's Duane. We wish him luck today!
Next up is Paul Wisniewski (2nd photo). I first met Paul in about 1984 or 85. Paul used to kill it at the Fisherman's Inn, and we skated Ocean City and Cedar Crest together more than once... Paul's been in So Cal way longer that me, and never stopped skating. He still rips! He's also been doing a really cool skate company called Green Issue. It's a skate company with a conscious. We've just started carrying Green Issue tees and decks at the Hollywood Blvd. store. Both of these guys live by the same principles as we do at Glory. We live outside of the mainstream and want to buck the system. Skateboard, Punk Rock and Motorcycles have always been about freedom and getting away from the media produced lifestyles that have been jammed down our throats since birth. We all have the ability to live by our own policies and have some fun while doing it. I try and remember that every day.
Fight the Power....
Posted by Glory Sales and Service Inc. at 7:23 AM

Daily chaos that is the life of Justin Glory...